So as I’ve said in some past posts, my buddy Neil (Joe Don the Megaladon) came out and hiked about five days of the trail with me. And I must say, he had no idea what he was getting in to. I’m going to try to not write too much about our journey, because his nightly Facebook updates make up one of the funniest, most accurate, and most amusing accounts of the Appalachian Trail I’ve ever seen.

But first, a few quick observations and anecdotes that I remember well from the trip. The first full day Neil hiked with me was honestly one of the toughest days I’ve had on the trail. There are a few reasons for that. Firstly, the terrain was rough. There were a lot of steep climbs and descents on exposed rocky surfaces.

Then there is also the aspect of having a visitor out on the trail with you. Before Neil came out, I told him I was doing around 20 a day, and his response was “Cool, I don’t want to hold you up. So I’ll be ready for that.” I knew that was a lie, even if he didn’t. 🙂 It’s just too difficult to come out of the real world and pull 20’s through multiple days. I still wanted to push Neil, but I also wanted it to be a fun trip for him. So it’s kind of a delicate balance between the two. And what makes it even more difficult is that most people envision the trail completely different than what it actually is. It’s hard work, and people just don’t really expect that for whatever reason, myself included!

So between the terrain and the shock of what hiking actually entails, we got through only 12 that day. I never told Neil this, but I was a little worried at that point. I thought it was going to take weeks to get him to his destination!!! But I need to give Neil all the credit in the world. His goal, Pawling, NY, was about 80 miles from our starting point. I challenged him to do it in about five and a half days. And to his immense credit, he pulled it off. After day one, I would have never guessed we’d make it in the time frame we did.

But the funniest part through all this was the fact that Neil tried to quit on my multiple times. There must have been an extreme internal struggle going on with him to push on to Pawling, or to quit where he stood and head into the city. The best attempt at quitting happened around the third day. I was hiking about ten minutes behind Neil at that point, and as I came upon a road crossing, I saw Neil with his back to me, sitting on a guard rail, trying to thumb a ride into New York City! We were on an on ramp from a little traveled road to the highway above us. So the chances of him catching a hitch there were very low. So I came up to him, and the conversation went a little like this:

Neil: Oh, hey man. I was just trying to hitch a ride into the city. It probably wasn’t going to work. But if I got one, I was just going to shoot you a text and say “Hey man, I’m in the city.”

I’m glad he kept on going. But that was one of the funniest attempts at a hitch I have ever seen.

One of the other great parts that I’ll never forget is Neil’s water treatment method. I had told him the easiest and cheapest water treatment method for him would be drops (pretty much bleach). Instead, he comes out with a Life Straw. Whenever he wanted to drink, he would hilariously break out his Life Straw, put it into his bottle of dirty water, and drink through this oversized, cartoonish looking device. He looked like a little kid drinking out of a sippy cup a lot of times, and I never told him, but those were always bright spots in my day. So thanks for the jokes Neil!!

Anyway, with that, I’ll let Neil tell the rest of the story of his trip. And at the bottom are some pictures from the journey. Before I turn it over to Neil, I need to congratulate him on sticking it out to Pawling. Good work dude! I pushed you super hard, and you gutted it out. It was a blast! 🙂

Day 1: I started my hike on the AT today at greenwood lake, NY at 2:30 after some beers and ice cream. Knocked out a quick 4 miles to get my feet wet. Pack is surprisingly heavy ( around 35 lbs) so getting used to that. Learned to navigate my trekking poles which are really ski poles. Just watched toad cook dinner on an oven made out of a miller lite can. Tent is up. Belly is full. Feeling pretty dang good.

Day 2: started my day at 6:30 am after one of the worst nights of sleep I ever remember having. I guess that will happen when you sleep on the ground at a 30 degree incline. Nothing some dehydrated eggs and bacon couldn’t fix. Even had a cup of coffee. The 13 miles were way harder then I was expecting, especially given my recent “training” I had been doing, which consisted of taking my dog for longer then usual walks. To say I was ill prepared is an understatement. Surprisingly my feet are alright but it’s the pain in my shoulders and chest that is getting to me. Was also bummed out to find out that my super healthy bags of vegetable purée are really baby food. Got lots of it though. The landscape is very rocky through New York. I saw a couple deer today and took a bath in a pond. My legs feel like ramen noodles which proves that you really are what you eat. Gonna have some dinner and whiskey and a smoke and its lights out at 9:00 for me. Feeling exhausted but can’t wait to do it again tommorow.

Day 3: Woke up at 6:00 to the sound of rain drops on my tent which may sound kind of peaceful but instead I awoke frantically, decamped and found shelter till we could start our hike. Started out the day pretty optimistically but after the 4th straight hour of walking through a down pour morale started to succeed. The path became just one long puddle and my boots and socks were both soaked. At one point we crossed over a highway and I saw that NYC was only 35 miles away. All I had to do was extend my arm out and put my thumb up and i figured within the hour I could be eating a cheese steak on Fagans couch. I took the road less traveled though and continued into the woods. The clouds broke around 1 and I just zombie hiked through the rest of the day which totaled around 17 miles. We climbed Bear Mountain (1300 ft) crossed over the Hudson, tackled “anthony’s nose”, and just set up camp. We have a fire lined up for tonight. Everything hurts. Honestly wasn’t sure if I was gonna make it through today. Two more days coming up. Both 20+. Hoping I make it to Pawling by Friday morning. Joe Dohn “The Megladon”… Signing off.

Day 4: Boots were dry in the AM. It was on. Did 21.7 miles. Too itchy and exhausted tonight. Made a bomb Kippers and ramen dinner and glad to be off my feet for a couple hours. Until tomorow….

Day 5: I have a confession to make. I had full intentions of quitting today. Tried twice actually. What I had done yesterday was the most physically challenging thing I had ever done in my life. I woke up today bloodied, bruised, and blistered and at the first road I saw I tried to hitch to NYC. Tried to call a taxi a 6 more miles down the road. Toad talked me down off the ledge though. It ended up being another long day, barely making camp before the sun went down. The best part of the day out here is always dinner time. It means your done hiking. And that its just about bed time. Taking breaks and reading trail journals is probably the second best part. Today we found an entry from a hiker named YoTe but I think it’s pronounced “yo-te”. It’s mostly nonsense in there but its pretty entertaining stuff. Just finished a double portion of ramen and carried my tired bones into my tent for the last time on this trip. Finishing up in the AM tommorow… as planned.

Day 6: Woke refreshed. Realized last night you don’t fight the slant. You embrace it. Hiked just shy of a mile to the tree of life. My trip was over. Tried to hitch, again, into Pawling, which turns out not to be my forte. 3 miles later I’m on a train to NYC. This last week was so bitter sweet, but by no means any monumental achievement. The real take away I got from this experience was that what these hikers do during their 6 months on the trail is an unbelievable feat if they see it to the end, which only 1 out of 5 thru hikers will do. The trail mileage is about 2,148. To put that in perspective, that’s from Richmond to Phoenix, by foot, with 40 pounds on their backs. If you take into consideration the change in elevation, that would mean these hikers are walking the entire length of the country, and then some. You come to find out that everyone on the trail is there for a different reason, but all with one common goal. There is this delicate balance of camaraderie and self reliance. It becomes a way a life and I’m grateful I was able to see a small glimpse of it… Thanks for the feedback along the way.

Neil is up at the top. Then there’s me, D, and Ma. Mom, Dad, and D came and visited me for the day as well and hiked about four miles through some of the toughest terrain I’ve had. And the best part of it all was we packed out a bunch of awesome cured meats, cheese, and some artichoke hearts and olives and stuff. So at the shelter two miles in, we had an awesome dinner. Thanks for coming out guys! You killed that section! There’s a few pictures of us hiking that part below as well. 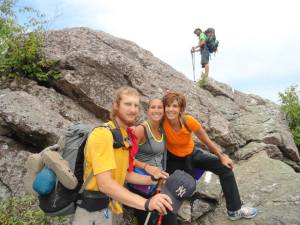 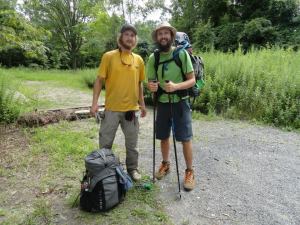 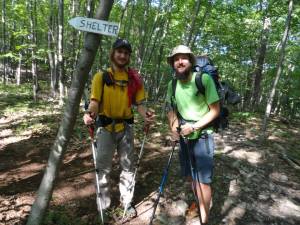 Before we started our journey. There’s Indy on the left, then Neil, Ma, me, and D.

I love this picture. There’s Dad!

Here’s our awesome dining experience. We had all kinds of awesome stuff (and some whiskey)! 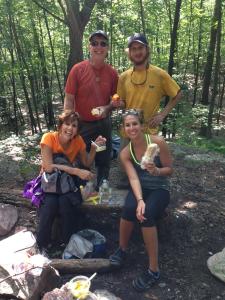 You can see how rough the terrain is in this picture. As we climbed off this rock, we went straight ahead, down toward where you see all those other rocks. New York had some of the toughest terrain on the trail. It was fun, but it was rough. 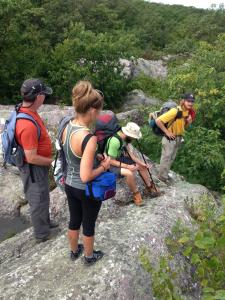 Something I've Left Out For a Reason - My (stoogy) Siblings

A Return to the Trail

Want to join the discussion?
Feel free to contribute!

This site uses Akismet to reduce spam. Learn how your comment data is processed.

“You’re Not Going To Make It”
Scroll to top